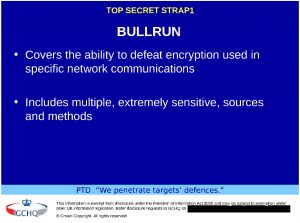 BULLRUN is an NSA programme aimed at decrypting encrypted network traffic [GUA01]. Decryption capabilities include inserting vulnerabilities into commercial encryption tools and IT systems, collaboration with other intelligence agencies, and “advanced mathematical techniques” [NYT01, GUA02]. The programme has the ability to decrypt data flowing through major communications provides and peer-to-peer tools such as Skype [NYT02].

Encryption keys are harvested from servers and held in a Key Provisioning Service, which can automatically decrypt traffic if a key is available, or otherwise ask a Key Recovery Service to obtain the key [NYT02].

The programme also seeks to “influence policies, standards and specifications for commercial public key technologies” [NYT02]. The NSA is believed to have inserted a cryptographic backdoor into a standard published by the National Institute of Standards and Technology (NIST) and the International Organization for Standardization (ISO), and to have paid a U.S. software company to implement the flawed standard [REU01].

GCHQ has a similar programme named EDGEHILL [GUA01]. GCHQ has been working to develop methods to decrypt the traffic of Hotmail, Google, Yahoo and Facebook, and proposed a system to decrypt data from fibre-optic cable tapping programmes such as TEMPORA in “near-real time” [GUA01].

Combined with other state surveillance tools:

The BULLRUN programme partners with technology companies to insert vulnerabilities, and also uses covert activities to manipulate the development of international encryption standards [GUA01]. However, some companies state that they were coerced into handing over their master encryption keys or creating security holes [NYT01].

The programme can be compared with the Clipper Chip proposal of the 1990s, which aimed to mandate weakened encryption in order to facilitate surveillance [NYT02]. The EFF, U.S. congress and others thwarted that earlier proposal, arguing that it was against the 4th amendment of the U.S. constitution.