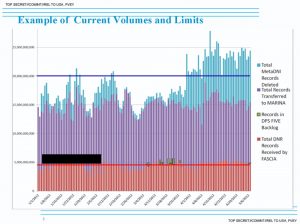 Two kinds of data are collected from mobile devices [WAH01].

The leaked documents show that the GCHQ works in partnership with the NSA in DNI collection, specifically to track location using the Google tracking cookie PREFID that is gathered with personal data communications. This cookie can be used to hack into devices [WAH02].

The FASCIA programme uses a variety of data analysis techniques to locate and track individuals using these two sources of data (DNR and DNI) including [WAH01; NSA01]:

R6 SORTINGLEAD – Cloud-based version of CHALKFUN that includes additional features such as search by countries or locations of interest [NSA01].

TAPERLAY –  The NSA’s tool for looking up the registered location of a mobile device — the provider and country where a phone was originally activated — in the Global Numbering Database [WAH01].

JUGGERNAUT – A signals processing system that can process raw feeds between mobile carriers through the SS7 protocol [WAH01].

FASCIA is the National Security Agency’s enormous database containing trillions of device-location records that are collected from a variety of sources. The leaked documents show the volume and types of device-location data collected. Mobile phone metadata analysis can reveal a high-level of detail regarding people’s movements.

When mobile devices are turned on and begin searching for wireless signals, they show their locations to any radio receivers in the vicinity. When a mobile phone connects to a network, it registers its location to one or more signalling towers that store this information in databases (known as Home Location Registers and Visitor Location Registers) maintained by telephone providers and clearing houses so that calls can be made and received.

These registers store a device’s approximate location using service providers positioning of devices by triangulating their distance between multiple towers in the vicinity. These can reveal the country, town, and even street level of the person. In addition, some mobile devices use WiFi and GPS signals to fix their locations, which provides geo-location data. Smartphones can also display their location through mobile apps, built-in location based services and IP addresses [WAH01].