The conference brought together international scholars, representatives of 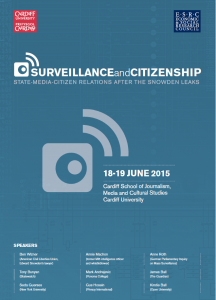 digital rights organisations, technological developers, and surveillance experts to discuss the state of surveillance and the implications of the Snowden revelations. Two years after the leaks began, we reviewed their media representation, policy developments, impacts on activism and civil society, and technological responses. The conference includes strategy sessions on policy reform and a usability and security hackathon.

More about the ‘Digital Citizenship and Surveillance Society‘ project